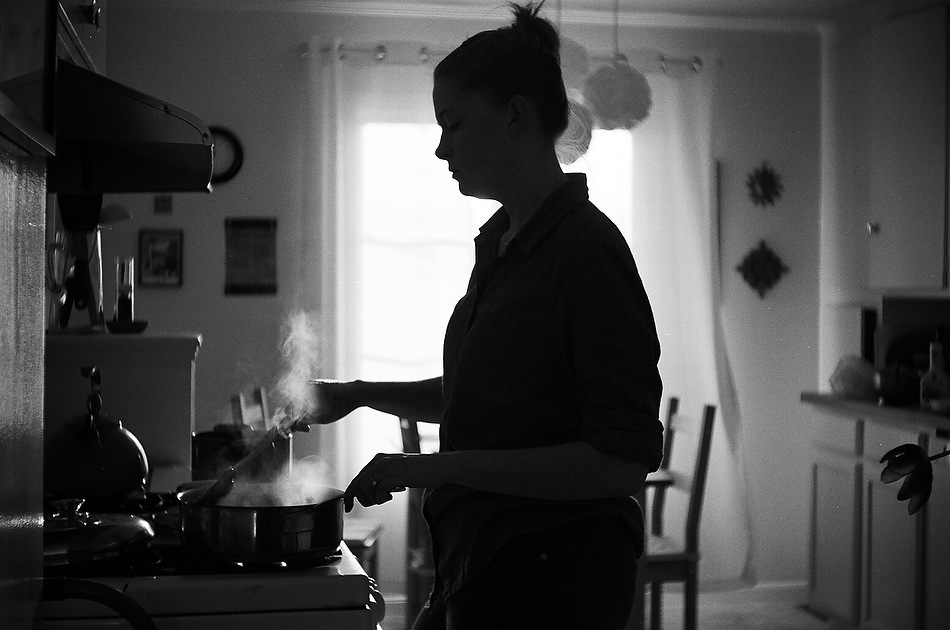 Sarah making something delicious in our kitchen, photographed on my grandfather’s Argus C3 from the 1950’s. Although designed in the 1930’s, this particular model is about 15 years younger.

The state in which my grandfather’s cameras were handed down to me is impressive. Granted, none of the cameras had been touched since 1969, but even then, it is clear that Bob Diefenbach took great care of his photography equipment. My grandfather treated these cameras like new, even though the Argus C3 was particularly obsolete even at the time he was using it.

The Argus C3 was made for nearly 20 years, which is incredible. It is hard to imagine any of today’s technology being relevant or sold for two decades. 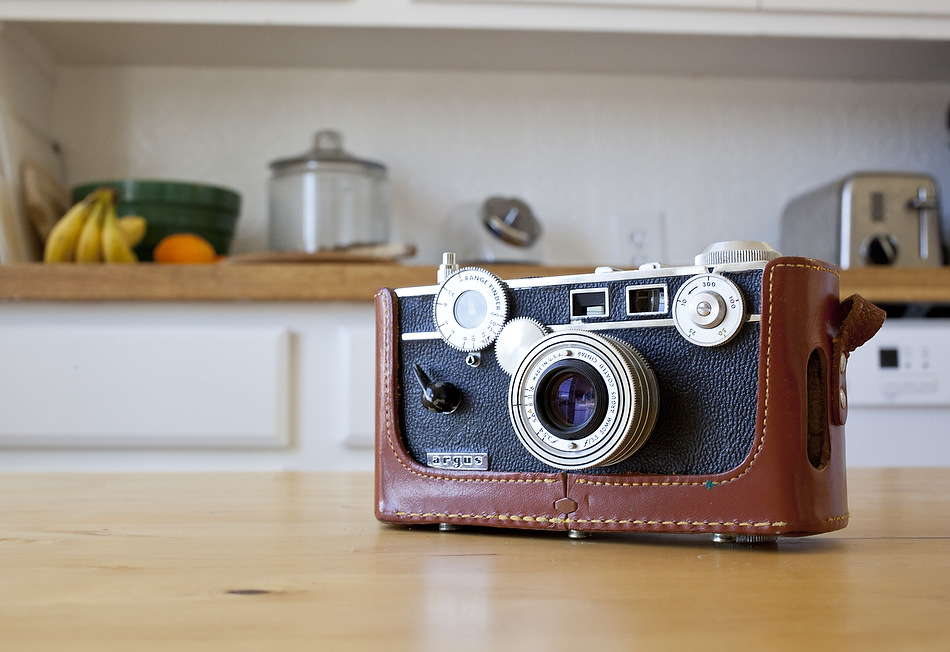 Based in Ann Arbor, Michigan, Argus’ C3 was the most produced camera ever in its day with 2 million units sold. 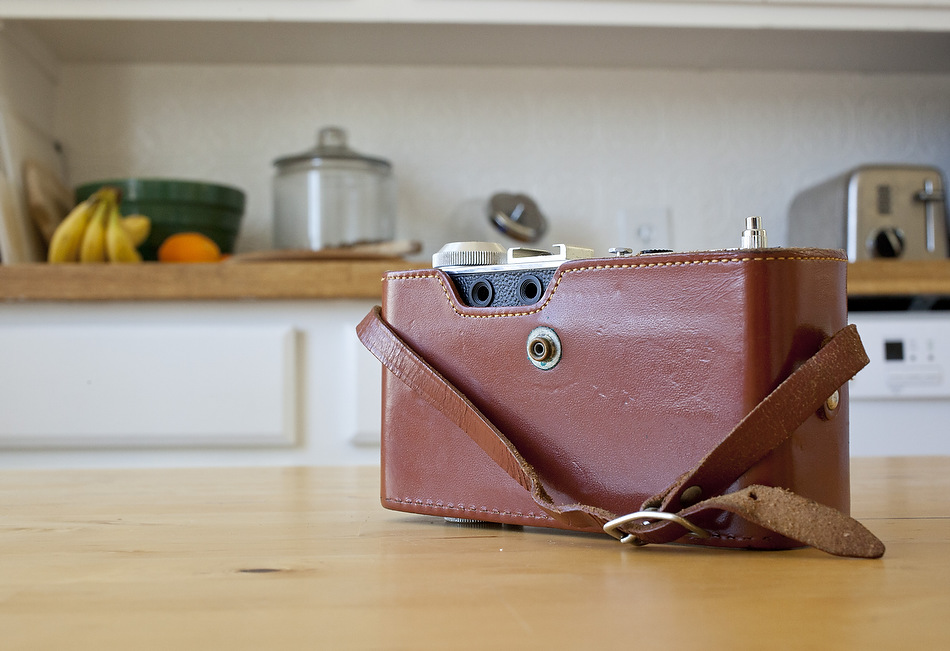 The two separate viewfinders make for a slow approach to photography. The one on the left is for framing while the other is for focus.

Nicknamed “the Brick” the Argus C3 looks and weighs as much as one. Nothing is automated and, like the Argus C4, it lacks a light meter. As you can imagine, the C4 succeeded the C3, but mostly because the C4 was able to simplify the process by combining multiple actions into one (i.e. winding the film also cocks the shutter). 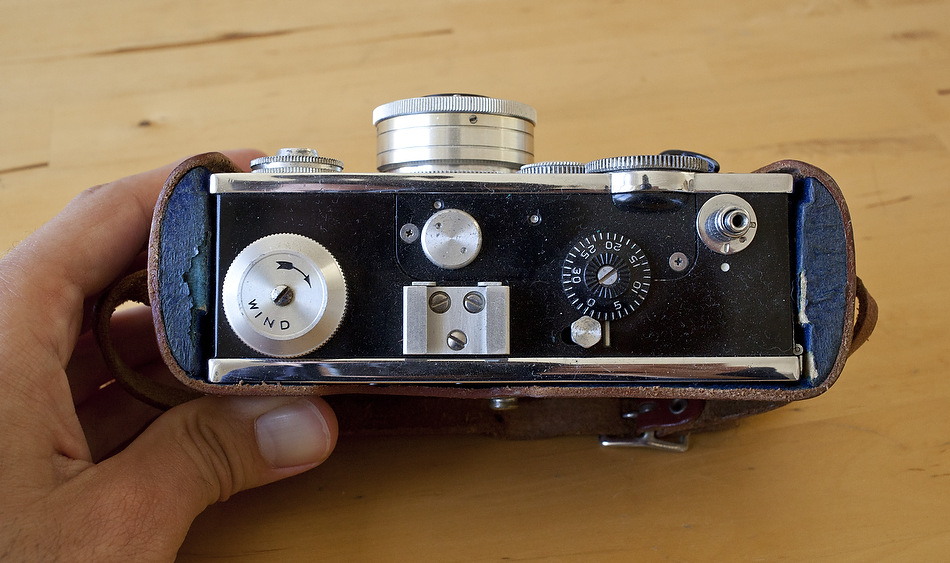 The small, hexagon-shaped silver button below the film counter is the wind-release.

Part of me wonders why Bob Diefenbach even held onto this camera. It was technology from the 1930’s utilizing a very primitive 3-blade aperture and is generally very cumbersome to use. The C3 lacks any ability to multitask – there are even two separate viewfinders, one for focus, the other for framing. I’ve never used something like that before.  Similar to a 4×5 view camera, the process to take a photo with a Argus C3 is relatively complicated and long: 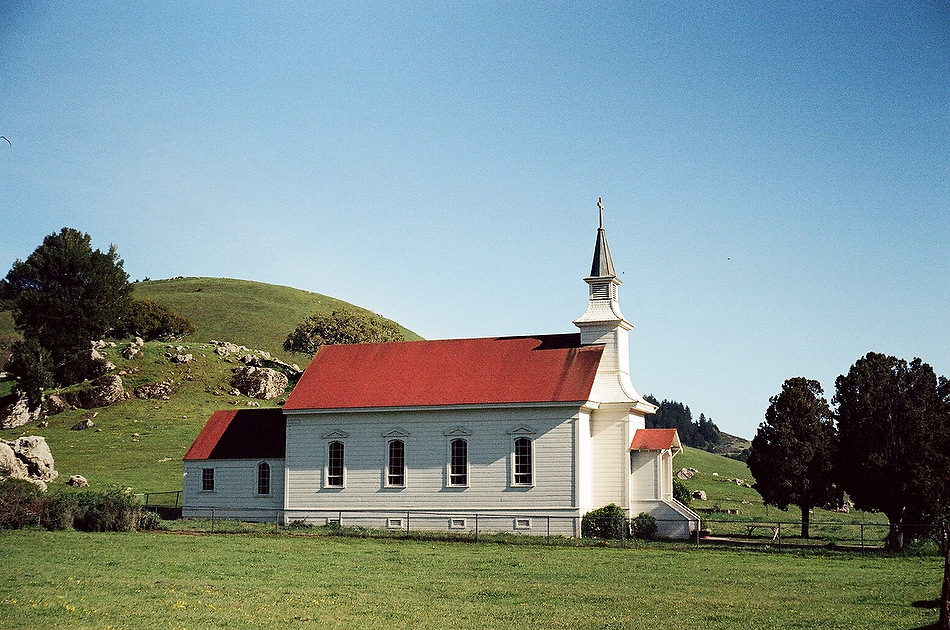 I am sure the veteran film photographers reading this are rolling their eyes at my grief, but I have a genuine problem with how slow this camera is. The Brick is not ideal for my kind of photojournalism, although WWII photographer Tony Vaccaro famously used an Argus C3 during the war.

I love how film cameras slow me down and make me appreciate the process, but this was just too much. When I did attempt to document people naturally, I had to limit myself to situations in which I knew for sure where the person would be so I could pre-focus. Unlike autofocus, or even contemporary manual focus, the C3’s focus window is very small and the focus ring is extremely stiff, making adjustments on the fly near impossible (the stiffness may be due to the age of this particular camera). 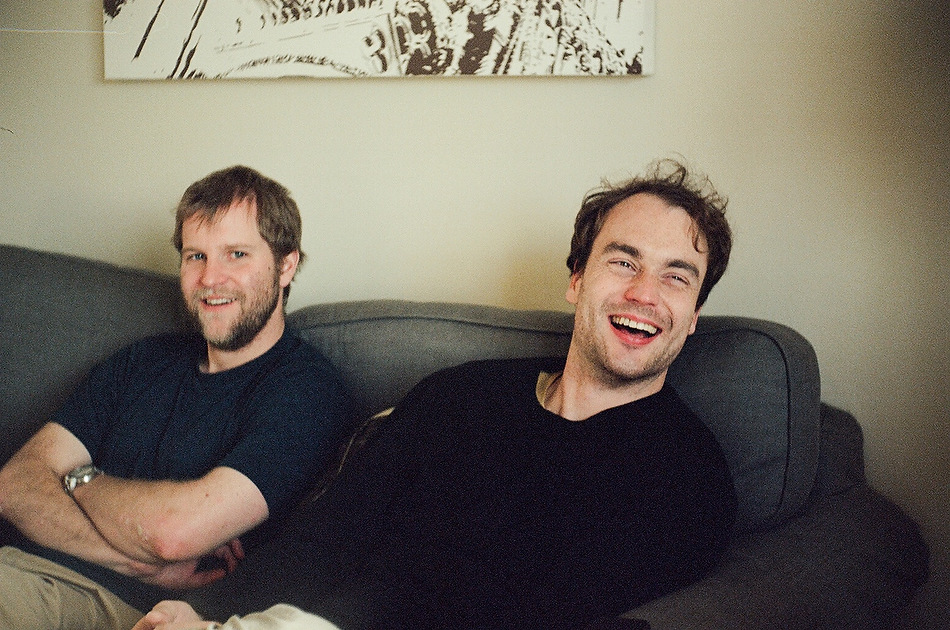 Okay, on to some positives. This camera is crazy sharp. Even sharper than the C4 or my 1970’s Minolta SRT 101 (my father’s camera). I don’t know if it is due to the rangefinder method of focus, but I have never seen a film SLR as sharp as this. I am still amazed. Portraits and landscapes are clearly a strong point with the C3. 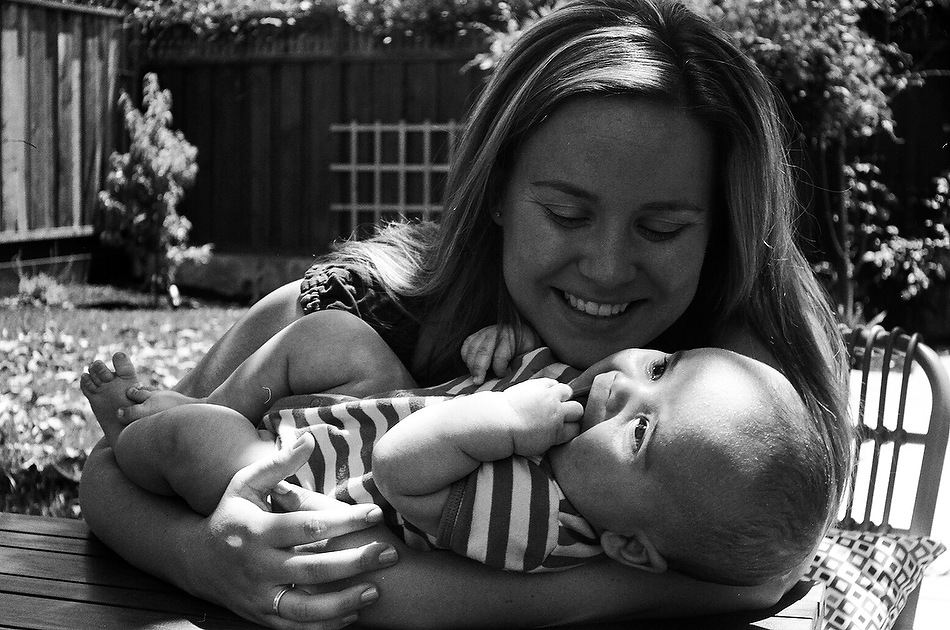 Chelsea with her baby boy, Gabriel, in their backyard. 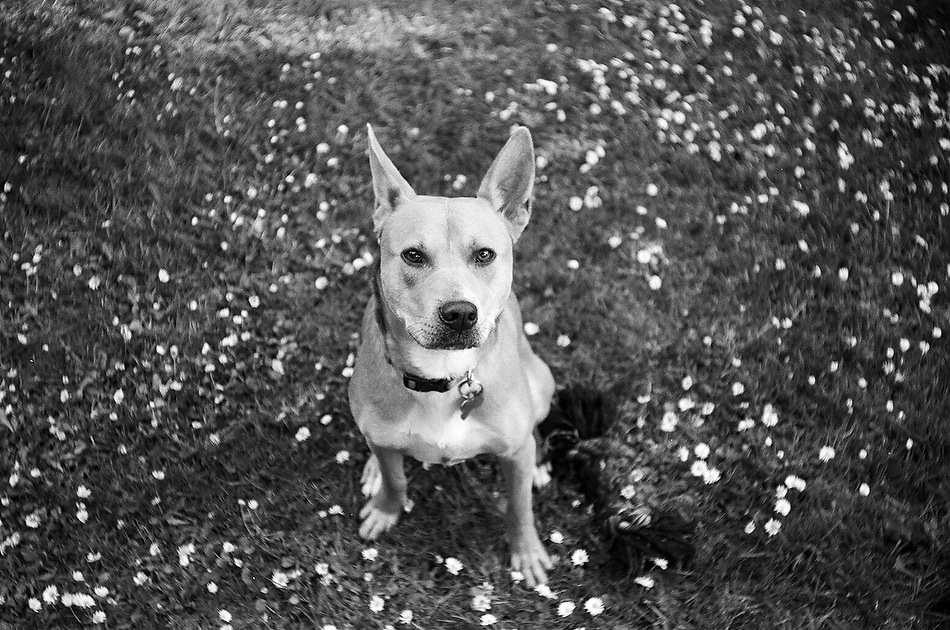 No photo blog post would be complete without a picture of my dog, Warner. 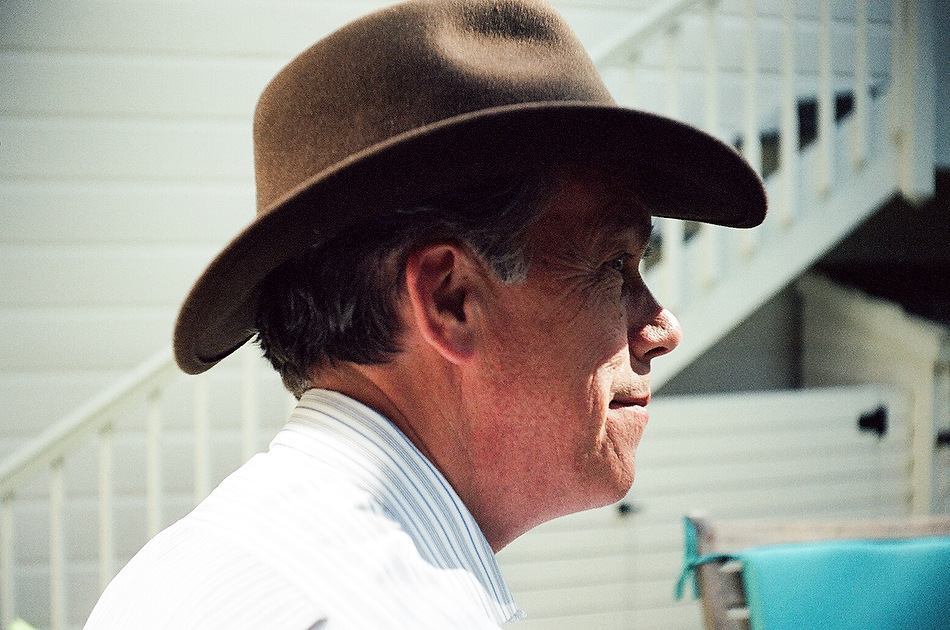 Because cocking the shutter and winding the film are done separately, double exposures are very easy to do (even when not intended). Here is a weak attempt of an intentional double exposure combining a portrait of my mother with a group photo of my family having drinks in the countryside. 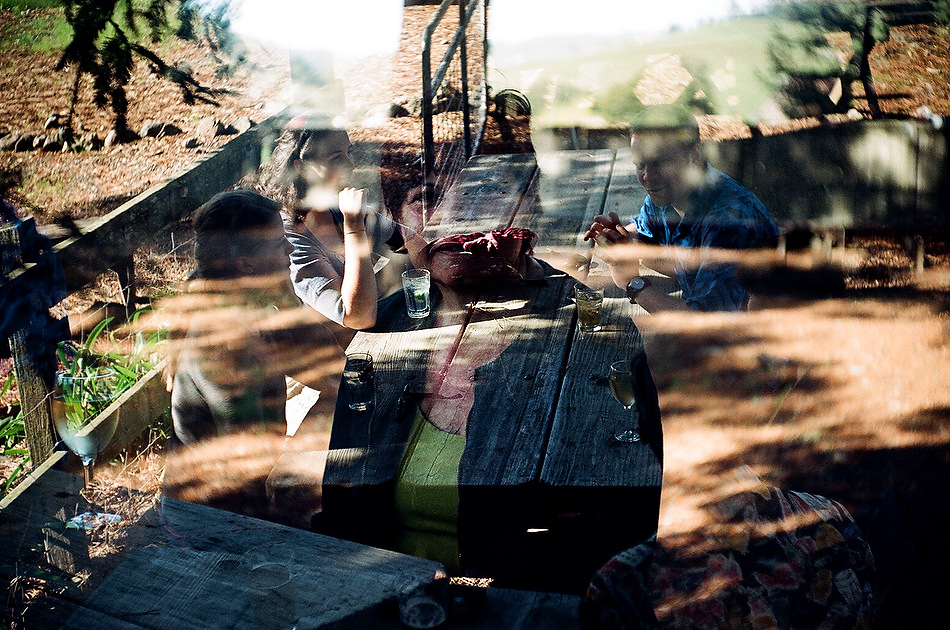 Double exposure of my mother, Ruth Diefenbach, and our family, in Nicassio, Calif.

I never brought the Argus C3 on assignment, but I am involving the Grandfather’s Cameras project into my on-going personal project leading and documenting Boy Scout Troop 14. I took the Brick along with me to the Memorial Day Flag Planting ceremony in the Presidio. This is where preparation, pre-focus and a deep depth of field came into play. 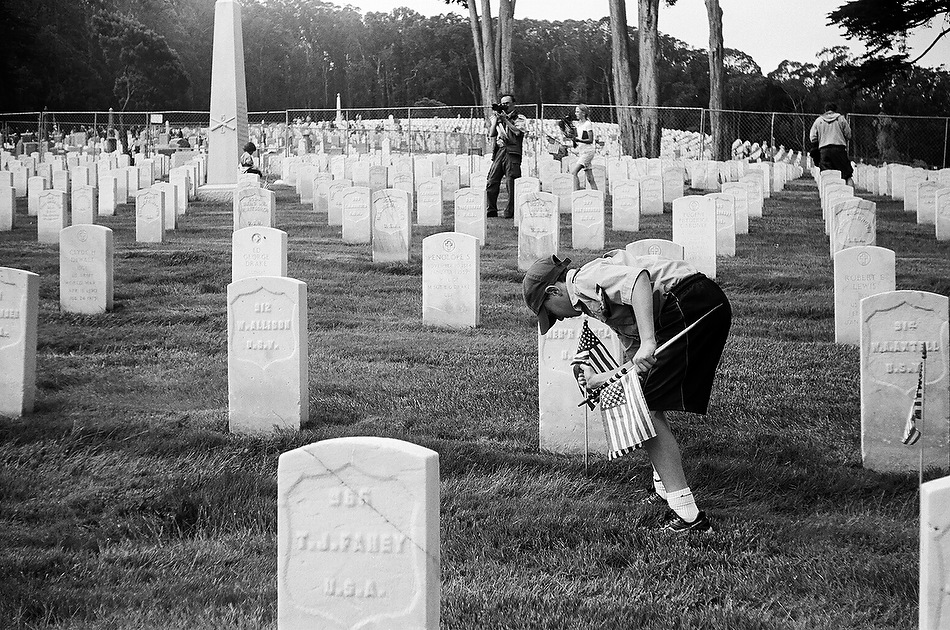 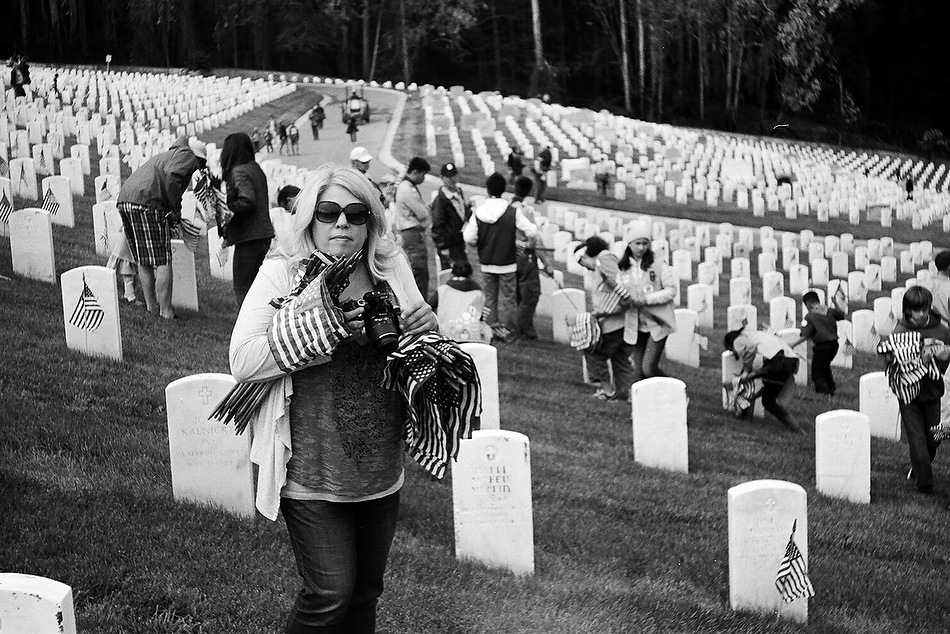 A scout’s parent doing the heavy lifting during Memorial Day flag planting in the Presidio Cemetery in San Francisco, Calif. 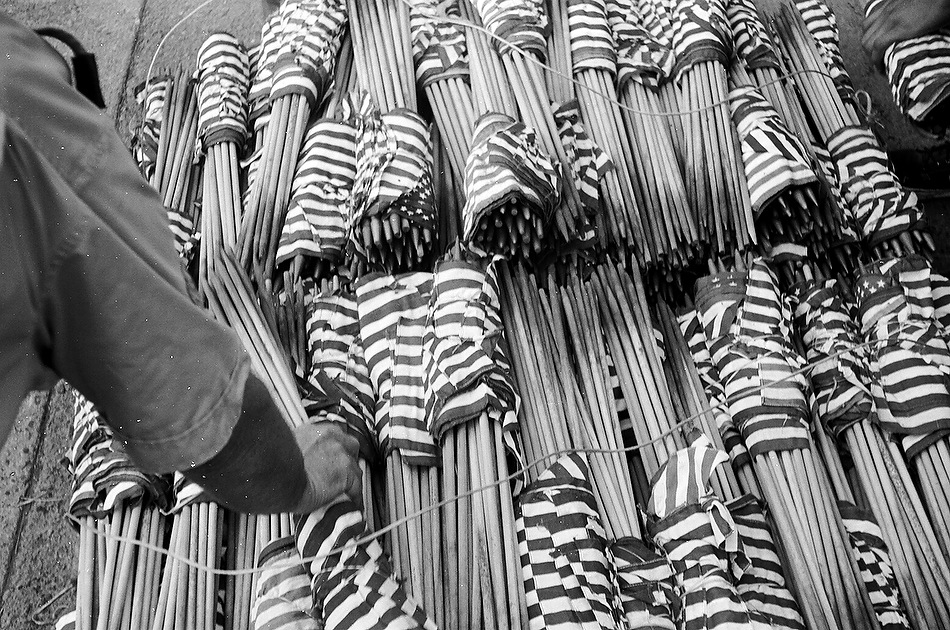 This is a small percentage of the total flags boy scouts plant in observation of Memorial Day.

I can see why my grandfather upgraded to the C4 from the C3. The Argus C3 is cumbersome, less pleasant to carry, and a bit of an ugly duckling. However, the pictures it makes are wonderful. The sharpness rivals that of my professional digital cameras.

I can ultimately understand why he never got rid of it.